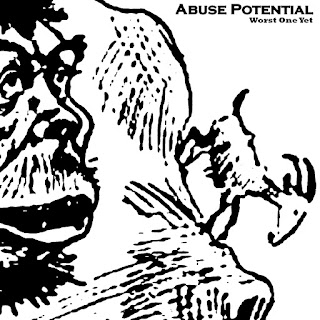 Announcing the latest semi-official Abuse Potential release, part of the Birth Control Productions catalogue but unavailable in any physical format.

Occasionally this death industrial/shitnoise project will deign to release archival material for free through its bandcamp page. This latest nugget of failure is derived from choice sessions recorded between 2012 and 2018— creations not fully-enough-realised to send to a label, but still interesting enough to share with the so-called world, if only for reasons purgative. Open wide!

Hear this as a “taster” (oh yes) for more complete works coming before the end of the year. ‘Worst One Yet’ includes the very crème of A.P.’s “private sessions,” remixed and mastered so as to be palatable to a wider audience. Feeling out and attempting to define the sound of a masturbatory endeavour heavily indebted to Mania (R.I.Fucking.P.), BDN, and Megaptera, among others.

The longest track here was originally released, in a much simpler form, on a DIY series of 3-4 bespoke cassettes given to a couple friends and admirers.

One day I’ll grow up, and then you’ll be sorry.